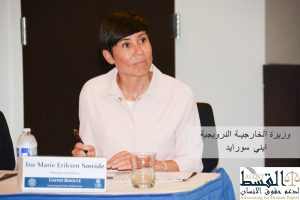 The position for women in Saudi Arabia is unacceptable, says Norwegian Foreign Minister Ine Marie Eriksen Søreide, adding that she is unsure how serious the talk of reform in the country is.

Responding to a question from Freddy André Øvstegård, a political representative from the Socialist Left, the foreign minister gave assurances that the Norwegian authorities are vocal in their concerns, both in bilateral and multilateral contexts.

In the mid-May, ten Saudi women activists were arrested, several of whom are considered icons in the struggle for women’s rights.  Amnesty International was one of the international organisations to react.  ““Saudi Arabia cannot continue to publicly proclaim support for women’s rights and other reforms while targeting women human rights defenders and activists” in this way, said Samah Hadid, Amnesty International’s Middle East Director of Campaigns.  Crown Prince Mohammed bin Salman’s promises “amount to very little if those who fought for the right to drive are now all behind bars for peacefully campaigning for freedom of movement and equality.”

Norwegian minister Søreide agrees.  “The Ministry of Foreign Affairs addressed the recent arrests of persons linked to the struggle for women’s rights with Saudi authorities both through the Saudi embassy in Oslo and via the Norwegian embassy in Riyadh,” she said.

Søreide regards the recent changes in Saudi Arabia as symbolic, and questions how far reaching they are.  “There are several negative developments going on at the same time, particularly the general situation for human rights, which seems to be worsening, which is happening in parallel to individual symbolic reliefs in restrictions,” she says.

She insists, however, that the Norwegian authorities do not hide what they think about the conditions in Saudi Arabia.  “When in contact with the Saudi authorities, we prioritize human rights efforts very high, and we regularly address individual cases. We also express our concerns about more general developments in the Saudi society,” she says.