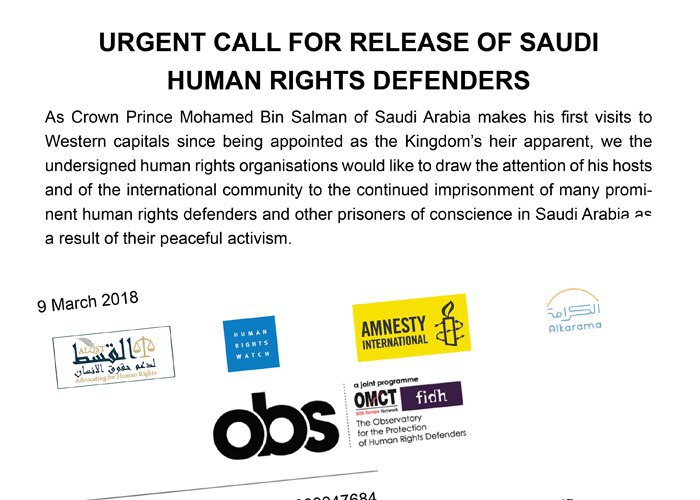 As Crown Prince Mohamed Bin Salman of Saudi Arabia makes his first visits to Western capitals since being appointed as the Kingdom’s heir apparent, we the undersigned human rights organisations would like to draw the attention of his hosts and of the international community to the continued imprisonment of many prominent human rights defenders and other prisoners of conscience in Saudi Arabia as a result of their peaceful activism.

In London and Washington Mohamed Bin Salman is promoting his ambitious plans for economic and social change in the Kingdom as a bold agenda for reform. We believe that genuine reform must start with respect and safeguards for basic human rights and freedoms.  While the Crown Prince has promised that women in Saudi Arabia will soon be allowed to drive for the first time in three decades, prisoners of conscience who dared to advocate for women’s right to drive, such as Alaa Brinji and Essam Koshak, remain in jail serving lengthy sentences.  Another prominent campaigner for women’s rights is human rights lawyer Waleed Abu al-Khair, the founder of Monitor of Human Rights in Saudi Arabia, who was tried under counter-terrorism legislation and sentenced in July 2014 to 15 years in prison. Saudi campaigners for women’s rights regard the right to drive as only a first, small step toward equality and freedom for women, and are calling for a far more significant measure: ending the guardianship system that allows Saudi men to control many aspects of their daughters’, wives’, sisters’ and mothers’ lives.

We the undersigned call once again on the Saudi authorities to release immediately and unconditionally all the members of ACPRA who are still in prison, as well as all other prisoners of conscience, and ensure a safe and conducive environment for human rights defenders.  We appeal to the Western leaders and officials meeting Crown Prince Mohamed Bin Salman and his delegation to urge them to release those who have been detained for peacefully exercising their right to freedoms of expression, association and assembly, drop all outstanding charges related to their human rights activities, and guarantee human rights and freedoms in Saudi Arabia as the basis for all other reforms.

-FIDH, within the framework of the Observatory for the Protection of Human Rights Defenders

– World Organisation Against Torture (OMCT), within the framework of the Observatory for the Protection of Human Rights Defenders