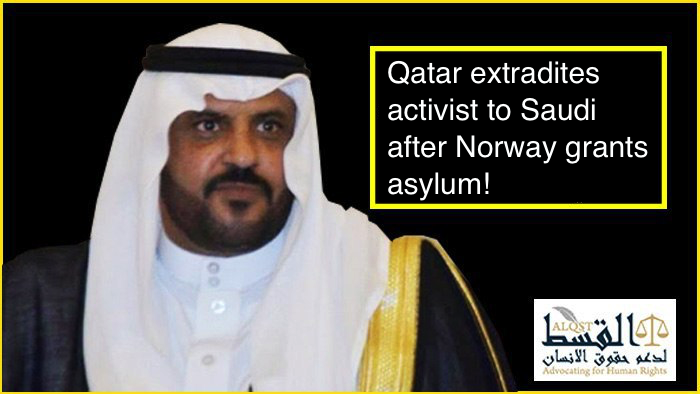 Qatar has extradited the prominent Saudi human rights defender Mohammed bin Abdullah al-Otaibi to Saudi Arabia, after Norway accepted his application for political asylum. Otaibi was arrested at Doha International Airport on Wednesday, May 24, 2017 as he was about to travel with his wife to Norway, on travel documents provided by the Norwegians.  Days later, on Sunday, May 28 at 3 a.m., Otaibi was deported overland to Saudi Arabia via the Salwa border crossing and delivered to the Saudi authorities, who sent him with an escort of Saudi security vehicles to the Dammam Prisons Department.

Otaibi was previously detained in Saudi Arabia for engaging in legitimate civil actions without committing any criminal act.  On January 1, 2009 he and other activists were arrested for taking part in a peaceful demonstration.  On that occasion he spent nearly four years in prison, including two months in solitary confinement cut off from contact with the outside world.  Since the activity Otaibi had engaged in, and for which he was punished, was a legitimate civil action, the UN Working Group on Arbitrary Detention determined at its 61st Session (from August 29 to September 2, 2011) that Otaibi’s detention violated Article 9 of the Universal Declaration of Human Rights, had no basis in law that justified depriving Otaibi of his liberty, and, in the view of the Working Group, constituted an arbitrary action without legal basis and in contravention and violation of a number of his basic rights.
In December 2016 Otaibi, together with Abdullah al-Atawi, another activist, was again brought before the Specialised Criminal Court (SCC) that handles terrorism cases.  All of the charges infringed his basic rights, most notably the charge of helping to establish a human rights association (the Union for Human Rights, UHR).  At the first hearing in their trial before the SCC, on October 30, 2016, charges were brought against the two men in connection with their peaceful activism and freedom of expression, the main charge being that of establishing a human rights association, the UHR.  They were also accused of publishing statements about human rights, which the public prosecutor viewed as encroaching on the prerogatives of governmental and civic organisations, namely the Saudi Human Rights Commission and the National Society for Human Rights.  The public prosecutor considered that publishing reports on human rights, communicating with the media and international rights organisations, being present at the guesthouse of the detained activist Dr Abdullah al-Hamid, and retweeting messages on Twitter were crimes worthy of punishment.
Given that Otaibi, Atawi and their associates closed down the UHR and ceased their activism in return for undertakings not to put them on trial — in May 2013 the founders of the UHR received a letter from the Ministry of Social Affairs rejecting their application to set up the association, refusing to grant it a licence and making the founders undertake to close it down and not carry out any of its activities — the case against them for founding the UHR can be considered closed, having been resolved at that time.  The Saudi authorities, however, reopened the case and systematically set about retrying and resentencing all of the activists involved.  Hearings in the trial are still continuing, with the next session scheduled for July 12, 2017, at which the verdict may be announced.
At the beginning of March 2017 Otaibi went to Qatar and applied for asylum based on Article 58 of the Qatari Constitution, which prohibits the extradition of political refugees and provides for the protection of refugees, as well as on the Arab Charter on Human Rights, Article 28 of which states: “Everyone has the right to seek political asylum in another country in order to escape persecution. This right shall not be enjoyed by persons facing prosecution for an offence under the ordinary law. Political refugees may not be extradited.”  He also applied to the Office of the UN High Commissioner for Refugees.  However the Qatari authorities did not grant him asylum, and the UNHCR failed to carry out its duties.  ALQST contacted the Qatari authorities and the National Human Rights Committee in the State of Qatar, as well as the UNHCR, to urge them to shoulder their responsibilities and protect Mohammed al-Otaibi from returning to Saudi Arabia, where he had been subjected to imprisonment and torture.
In statements attributed to an official source in the Qatari foreign ministry and broadcast by Al Jazeera, the Qatari authorities said the State of Qatar had extradited Otaibi to Saudi Arabia on the basis of judicial cooperation between the two countries, and that the extradition had been carried out in accordance with legal procedures and international agreements concerning the extradition of suspects and criminals.
ALQST insists that there is no legal basis for what the Qatari authorities have said.  Their claim to be observing legal procedures and international agreements concerning the extradition of suspects and criminals shows nothing but contempt for international law, a willingness to disregard the Qatari Constitution and endanger the lives of activists, and a deliberate blurring of the difference between human rights activism and acts of criminality.  ALQST strongly condemns and deplores the Qataris’ action and calls on the international community to hold the Qatari and Saudi authorities fully responsible for Otaibi’s safety.
ALQST also condemns the failure of the UNHCR, and specifically its offices in Abu Dhabi and Riyadh, to carry out its duties.  It calls on UN agencies not to put political interests above the tasks they are mandated to perform and the rights they have a duty to protect.
ALQST affirms that the activism in which Otaibi engaged was legitimate civic activism directed toward supporting human rights, and that the Saudi authorities must release him immediately and dismiss the political trial that Otaibi, his colleague Atawi and other activists have been facing.  ALQST calls for pressure on the Saudi authorities to stop persecuting activists and exploiting the judicial system in their own interests, and it calls for dissolution of the illegitimate Specialised Criminal Court.
Share Article