Closing statement of the ALQST Conference 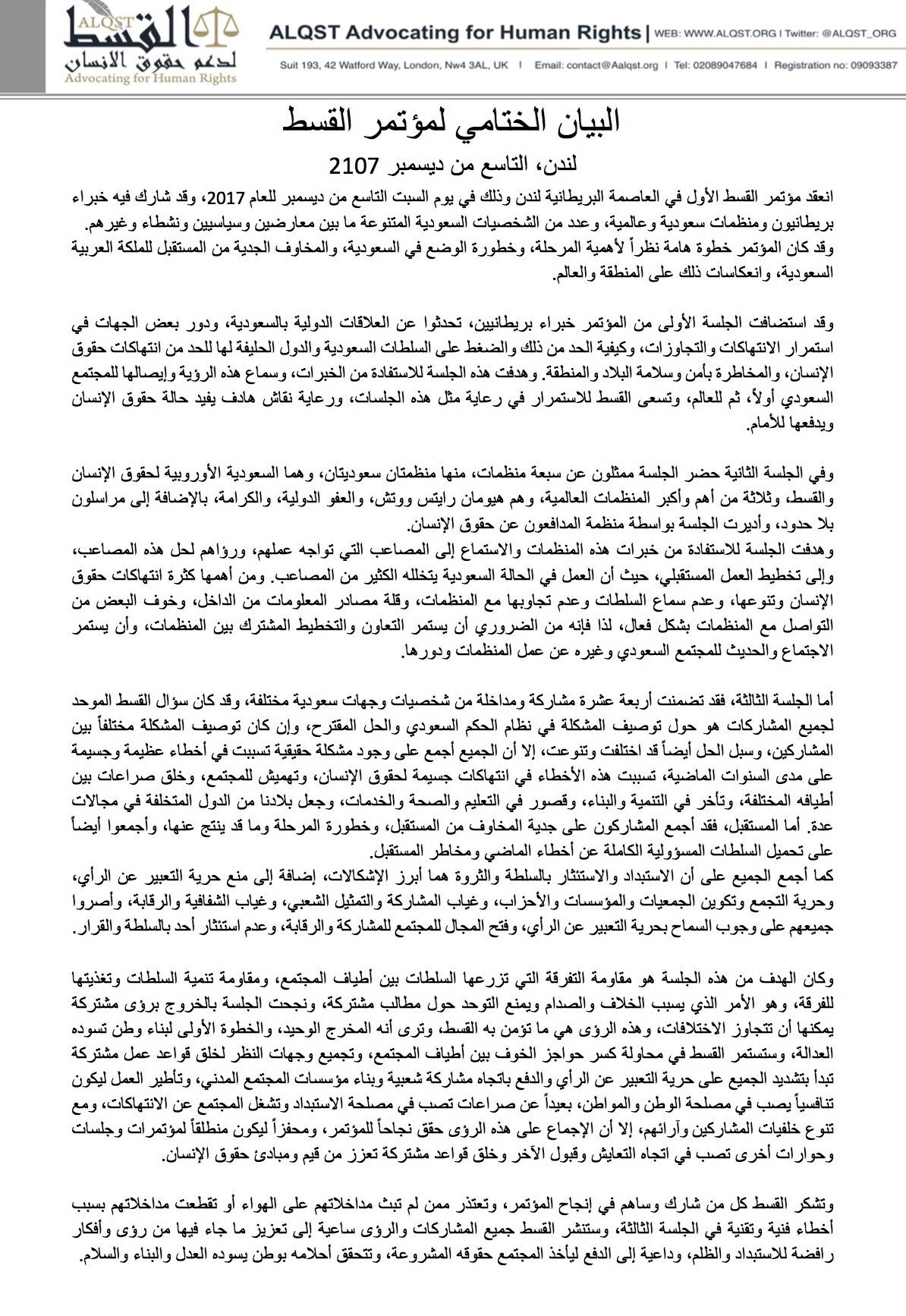 ALQST’s first conference took place in the British capital, London, on Saturday, December 9, 2017. Taking part were British experts, Saudi and international organisations, and a variety of Saudi personalities including opposition figures, politicians, activists and others.

The conference was a significant initiative, taking place as it did at this critical juncture for the Kingdom of Saudi Arabia, when there are serious fears about the country’s future and the repercussions for the region and the world.

The first session of the conference heard from a panel of British experts who talked about international relations with Saudi Arabia and the role of certain governments in helping to perpetuate abuses of power and human rights violations in the kingdom.  They talked about ways of putting pressure on the Saudi authorities and allied governments to end these violations and stop putting the country’s security, and that of the region, in jeopardy.

The purpose of the first session was to learn from the panellists’ expertise, hear their ideas, and communicate these firstly to Saudi civil society and also to the wider world.  ALQST aims to continue sponsoring meaningful debates of this kind in the interests of furthering progress on human rights.

The purpose of the second session was again to learn from the experience of these NGOs and to hear about the difficulties they face in their work, as well as their ideas for tackling them in future.  The many difficulties involved in human rights work in Saudi Arabia include the sheer scale and variety of violations taking place, the authorities’ refusal to listen or engage with NGOs, and the dearth of information sources inside the country.  People are sometimes afraid to maintain active contact with outside organisations, making it all the more essential for NGOs to cooperate and plan together, and to keep meeting and talking to Saudi civil society and others about their work and role.

The third session heard fourteen contributions from a diverse range of Saudi personalities and groups.  ALQST put the same question to all of them:  “What is your diagnosis of the problem with the Saudi ruling system, and what solution do you propose?”  Although the participants differed in their diagnoses of the problem, and their ways of solving it, they all agreed that there existed a real problem that had led to massive mistakes being made over many years, resulting in gross violations of human rights, the marginalisation of civil society, the creation of sectarian conflicts, delays in the country’s development process, and failings in education, health and public services that have left our country lagging behind in many areas.  The participants were also unanimous in having serious fears about the future of the country, in viewing the present situation as dangerous, and in seeing despotism and the monopolisation of power and wealth as the biggest problem for the country.  Other major problems they mentioned were the restrictions on free speech, free expression of opinions, freedom of assembly and the freedom to form associations and parties; the absence of public participation and popular representation; and the lack of transparency and oversight.  The contributors were all insistent that people must be allowed the freedom to express their opinions, and that the public must be given space to participate in and monitor public affairs, with no one having a monopoly on power and decision-making.

The purpose of this third session was to resist the divisions that the authorities try to sow among different sectors of society, and stand up to the authorities’ attempts to foster grievances leading to disagreements and disputes, preventing people from uniting around common demands.  It succeeded in coming up with some shared ideals capable of overcoming differences. It is these shared ideals that ALQST believes in and sees as the only way out of the present situation, and the first step toward building a country where justice prevails.  ALQST will continue trying to break down the barriers of fear between different sections of the community, and to reconcile different points of view to create a common basis for working together.  The starting point will be everyone insisting on freedom of expression, pressing for popular participation and the building of civil society institutions, and framing the work in such a way that everyone strives for the good of the country and its citizens rather than falling into rivalries that only serve the interests of despotism and distract attention from human rights violations.  Although the participants held different views, their unanimous endorsement of these ideals marked a success for the conference, and an incentive to hold further conferences, panels and debates working toward peaceful coexistence, acceptance of other people and views, and common bases for promoting the values and principles of human rights.

ALQST would like to thank all those who took part in the conference and contributed to its success.  It would also like to apologise to those whose contributions were not broadcast or were interrupted due to technical faults during the third session.  ALQST will be publishing everyone’s contributions, with the aim of reinforcing the ideals and thinking they put forward rejecting despotism and injustice, and giving Saudi society further encouragement to claim its legitimate rights and realise its dreams of a country of justice, progress and peace.