ALQST launches a global campaign to stand with Saudi women’s rights activists who have been subjected to sexual harassment, torture and other forms of ill-treatment in detention.

These Saudi activists, who have campaigned heroically for reform, need our support. Join the campaign by tweeting or sharing the hashtag #StandWithSaudiHeroes and by requesting your Member of Parliament (MP) or Congress to pressure the Saudi Government to end the torture and release them immediately. Will you #StandWithSaudiHeroes?

“I’ll do whatever I like to you, and then I’ll dissolve you and flush you down the toilet.” Saudi Arabian official to an arbitrarily detained, woman human rights defender

On 15 May, 2018, the Saudi Arabian authorities launched a wave of arrests against human rights defenders, mainly women but also men. This latest crackdown on activists was unprecedented in its precision and ferocity.

These women had been at the forefront of the women’s rights movement in Saudi Arabia for years:

Loujain al-Hathloul, 29, was previously arrested attempting to drive into Saudi Arabia from the UAE in 2014, and again in March 2018 after attending a session of the UN’s Committee on the Elimination of Discrimination Against Women (CEDAW).

Aziza al-Yousef, a retired computer science professor, was one of the first to call for women to be allowed to drive, and led campaigns to repeal male guardianship laws.

Eman al-Nafjan, a linguistics professor, had been writing a blog on women’s rights since 2008, and was part of the women’s driving campaign, arrested in 2013 while filming a woman driving.

Amal al-Harbi is the wife of prominent activist Fowzan al-Harbi, one of the founding members of the Saudi Civil and Political Rights Association (ACPRA).

Nouf Abdulaziz, a writer and television producer, had expressed her support to the arrested women on Twitter, and was an outspoken defender of Saudi political prisoners.

Mayaa al-Zahrani, a fellow activist and friend of Nouf, was detained after making a social media post in support of her friend.

Nasima al-Sadah campaigned for civil and political rights, women’s rights and the rights of the Shi’a minority in the Eastern Province of Saudi Arabia for many years. She stood in municipal elections in 2015, but was banned from participating.

Samar Badawi, 37, was the first person to file a lawsuit for women’s right to vote and took part in the women’s driving campaign. She was previously subjected to a travel ban in 2014 and arrested in 2016 for her human rights work.

The latest wave of arrests occurred just weeks ahead of the lifting of the driving ban on women  on 24 June.

For months after their arrest, little was known of their fate. Then, in October 2018, testimonies began to emerge that Saudi Arabian officials had sexually harassed many of these activists, subjecting them to torture and other forms of ill-treatment during interrogation since their arbitrary arrest in May. Such testimonies were reported by ALQST, Human Rights Watch, and Amnesty International.

Officials repeatedly tortured the detainees by electrocution and flogging. They beat the soles of the women’s feet (the punishment of falaka, or bastinado) and as of late October 2018, according to the testimony obtained, at least three of them showed visible marks of severe torture and had black eyes. They  were suffering from tremors and had lost weight.

Officials subjected some of them to physical, sexual harassment, including groping, . They stripped the women and photographed them naked. At least one of the women was psychologically tortured by being falsely informed of a family member’s death. Another was taunted with phrases like “who’s there to stand by you and protect you?”

Stand with the Saudi activists

At least two of the women saw Saud al-Qahtani in the torture chambers. Al-Qahtani, a close advisor to Crown Prince Mohammed bin Salman, and implicated in the murder of journalist Jamal Khashoggi, told at least one detainee while she was being tortured: “I’ll do whatever I like to you, and then I’ll dissolve you and flush you down the toilet.” This threat is chillingly reminiscent of the alleged fate of Khashoggi.

In light of these harrowing testimonies, detained Saudi human rights defenders, both women and men, need our support. The Saudi authorities must release the women activists immediately and unconditionally, along with all others detained for the peaceful expression of their opinions or for acting to promote human rights. The authorities must allow a prompt, impartial and effective investigation into allegations that women’s rights activists have been tortured.

However, in order to bring this about, further pressure needs to be applied on the Saudi authorities.

If you would like to take action, please join us in the campaign by sharing a picture, video or statement with the following hashtag: #StandWithSaudiHeroes. And if you can, request your Member of Parliament (MP) or Member of Congress to pressure the Saudi Government to end the torture and immediately release the detained women human rights defenders. 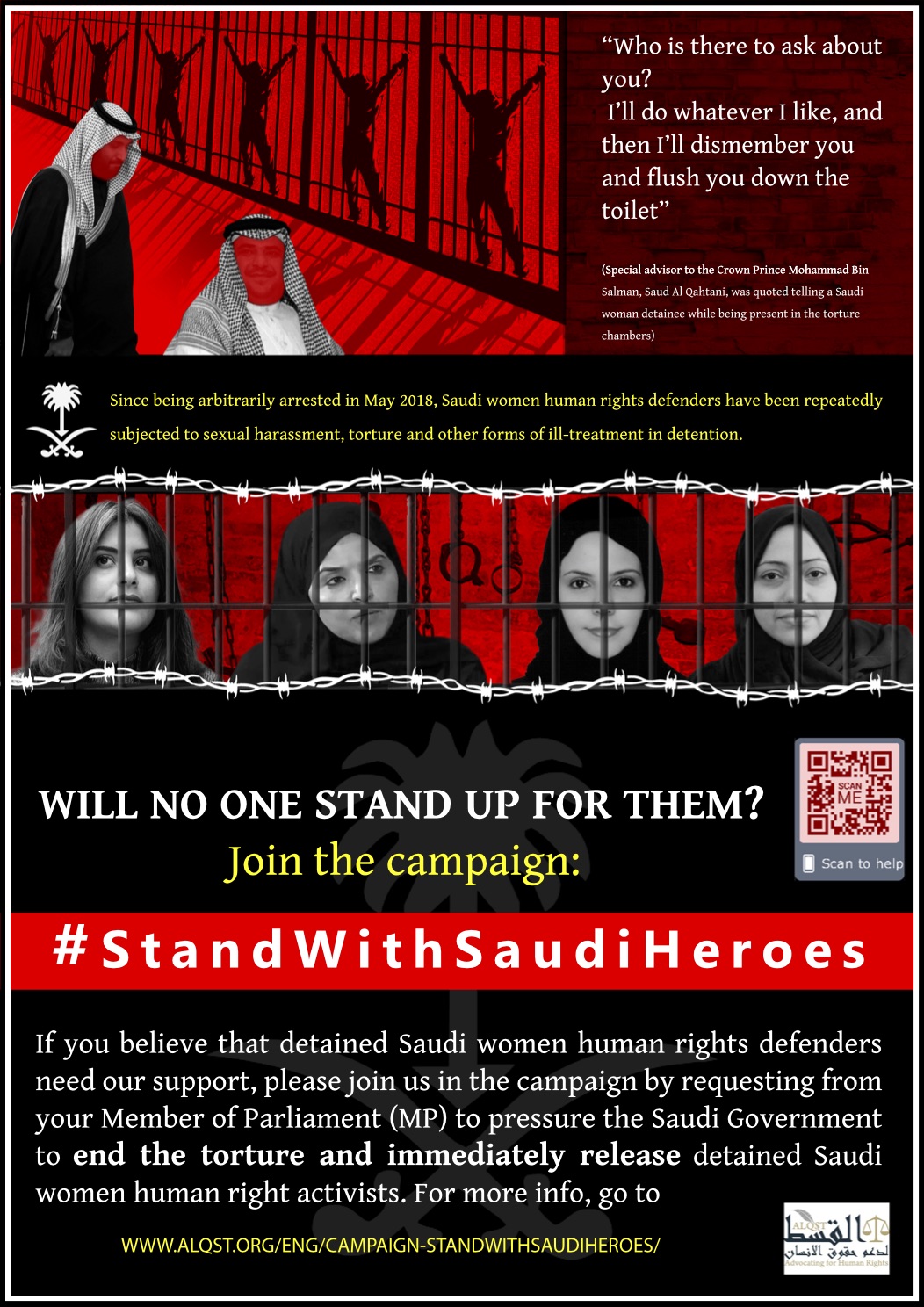 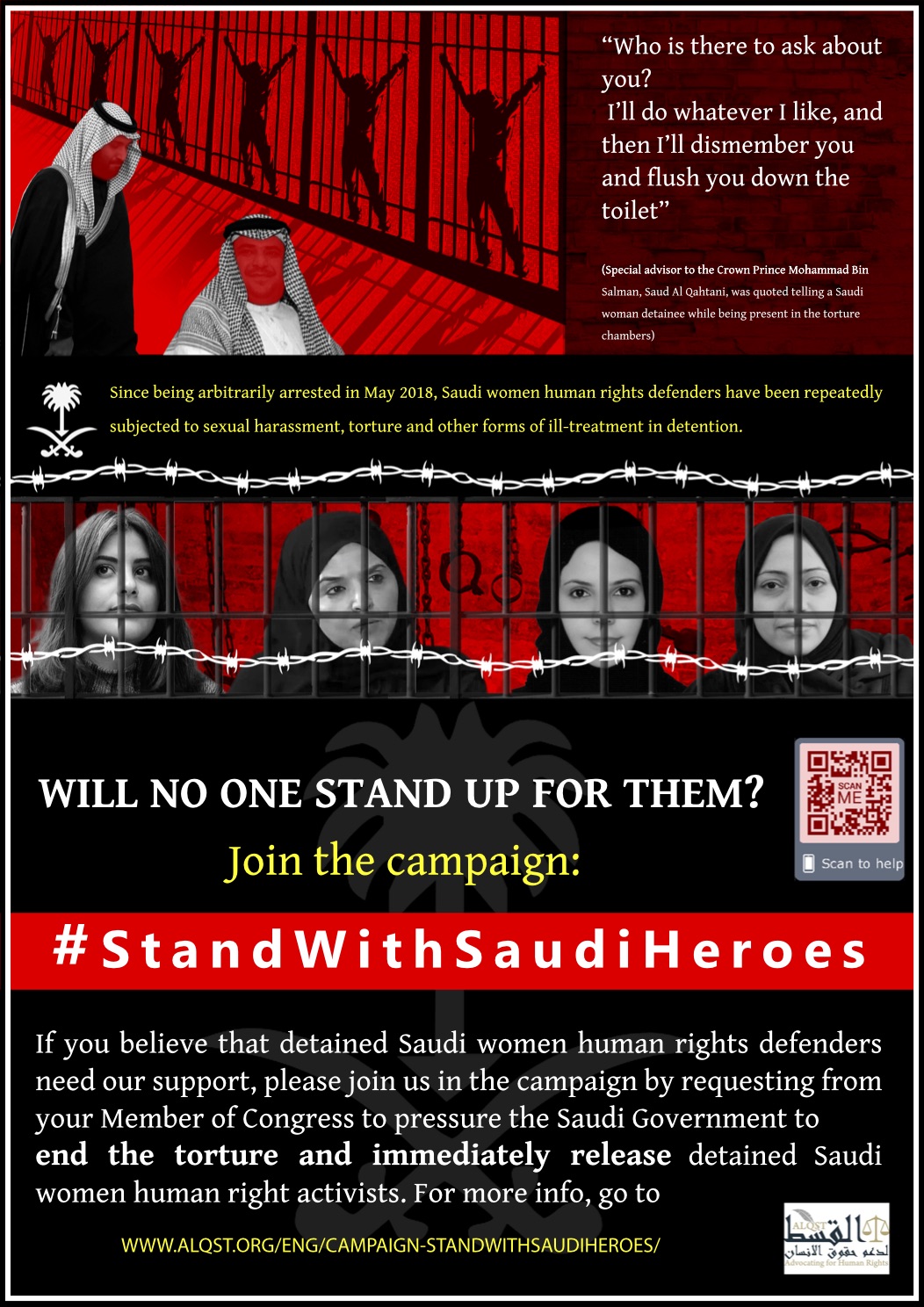 Biden must address Saudi repression during visit
As US President Joe Biden visits Saudi Arabia on 15-16 July, he must urgently address the unrelenting repression going on there, and do nothing that helps to rehabilitate the pariah kingdom’s de-facto ruler.
© 2022. All Copyrights Reserved For ALQST