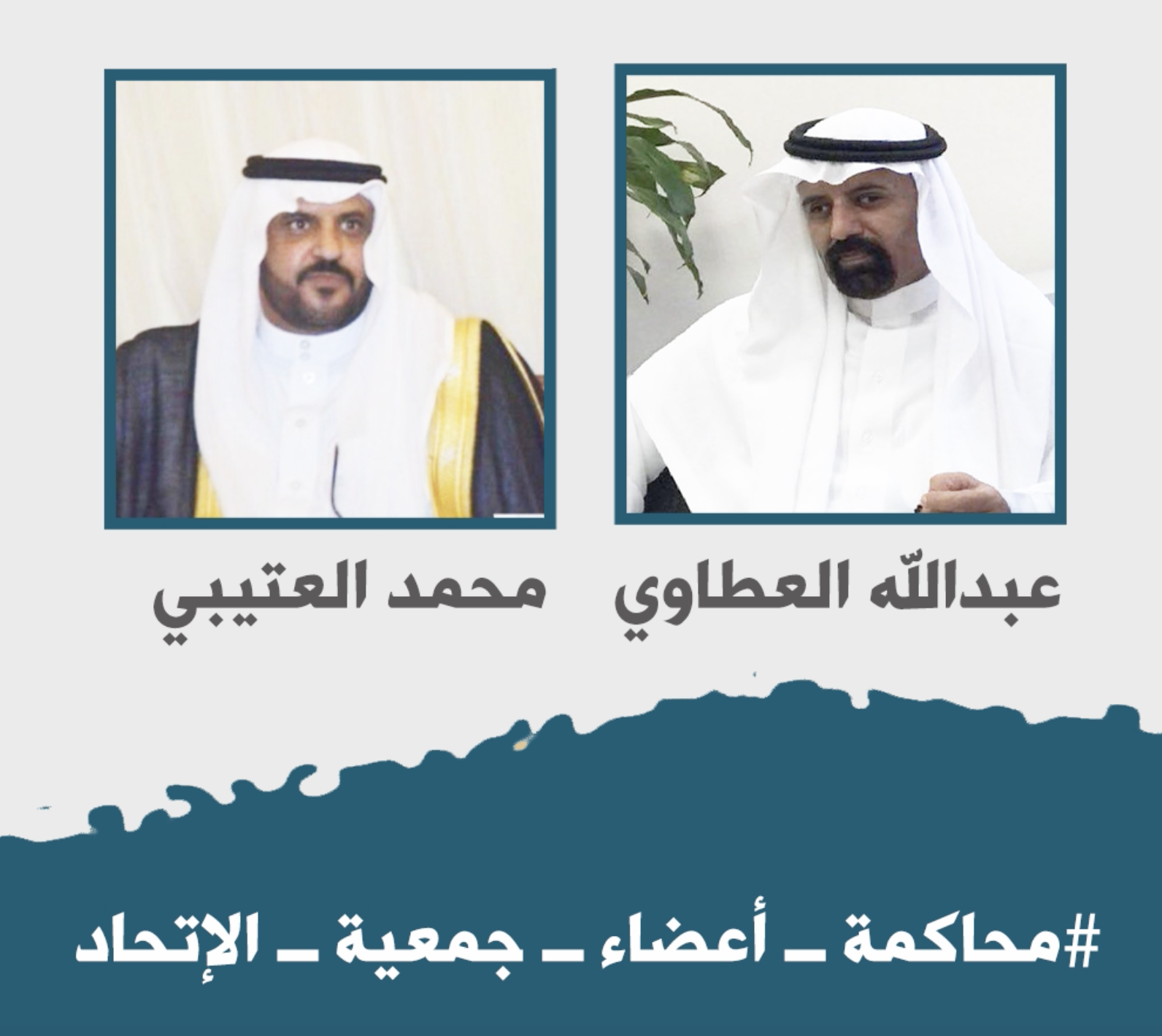 This morning, January 25, 2018, the Specialised Criminal Court (SCC) handed down jail sentences of seven years for rights activist Abdullah bin Mudhhi al-Atawi and 14 years for rights activist Mohamed bin Abdullah al-Oteibi on charges relating to their peaceful activism, notably the founding of an NGO, the Union for Human Rights.
The two men received a phone call on October 20, 2016 informing them that there was a case against them in the SCC, the Saudi court that handles terrorism cases, and informing them of the date of the first hearing.
The first session of the trial took place in the SCC on October 30, 2016. The two men were charged with offences relating to their peaceful activism and freedom of expression, the main charge being the founding of a human rights organisation, the Union for Human Rights.
They were accused of publishing statements about human rights, which the Public Prosecutor considered an infringement of the jurisdiction of government-sponsored civil society institutions like the Saudi Human Rights Commission and the National Society for Human Rights. The Public Prosecutor regarded publishing human rights reports, contacting the media and human rights organisations, being guests of the detained activist Abdullah al-Hamid, and retweeting posts on Twitter to be crimes deserving punishment. The first hearing ended with December 26, 2016 being set as the date for the next session.
In March 2017, Mohamed al-Oteibi left the country and travelled to Qatar, where he managed to obtain the right of asylum in Norway. As he set off for Norway, he was apprehended at Doha’s Hamad International Airport on May 24, 2017 and handed over to the Saudi authorities the following day.
Mohamed bin Abdullah al-Oteibi is a prominent defender of human rights in Saudi Arabia. He had been arrested previously in Saudi Arabia while engaging in legitimate civic activity without committing any criminal act. On January 1, 2009 he was arrested along with other activists and charged with taking part in a peaceful demonstration. On that occasion he spent about four months in prison, including two months in solitary confinement, isolated from the outside world. Given that the activity Oteibi had engaged in and for which he was punished was a legitimate civic activity, in 2011 the United Nations Working Group on Arbitrary Detention issued a formal opinion to the effect that Oteibi’s arrest breached Article 9 of the Universal Declaration of Human Rights; that there was no legal basis to justify depriving Oteibi of his freedom; and that in the view of the Working Group his detention was essentially an arbitrary measure with no basis in law that contravened and breached a number of his basic legal rights.
Oteibi and Atawi were once again brought before the SCC, the court that handles terrorism cases, in December 2016. All of the charges against them violated their basic legal rights. The main charge was that of helping to set up an association concerned with human rights (the Union for Human Rights), despite the fact that Oteibi, Atawi and their colleagues had already closed down the group and suspended its activities, in exchange for undertakings that they would not face any penalty.
In May 2013, the founders of the Union for Human Rights had received a letter from the Ministry of Social Affairs in response to their application to formally establish the association. The ministry refused to grant the rights group a licence, and sought undertakings from the founders that they would dissolve the association and desist from carrying on its activities. The Union for Human Rights case was thus closed at that time – yet the authorities reopened it in October 2016. They sought to reopen a case that had previously been closed in order to punish the activists involved and intimidate others. As the Public Prosecutor put it, “Let them be an example to others!”
Founding a human rights organisation, or publishing and tweeting information about human rights, or calling for political reform are not crimes that should be punished. They are legitimate activities that should be guaranteed and safeguarded by the Saudi authorities. Reopening the Union for Human Rights case is just one of the ways in which they are targeting activists, even to the extent of resurrecting issues that have already been dealt with.
ALQST calls for the immediate and unconditional release of Mohamed al-Oteibi and the dropping of all charges against Oteibi and Atawi, as these charges are unlawful, outrageous and a violation of their basic rights.
ALQST maintains that their trial was baseless, since Atawi and Oteibi’s conviction was for founding a civil association carrying out lawful activities, thus rendering the conviction null and void.
ALQST also maintains that the prohibition of peaceful activities is in itself a major reason for the occurrence of non-peaceful activities, and for the proliferation of rights violations by the government, since there is no one who can document or criticise its actions.
ALQST calls on everyone to press the Saudi authorities on these points and urge them to respect and protect human rights.
Share Article