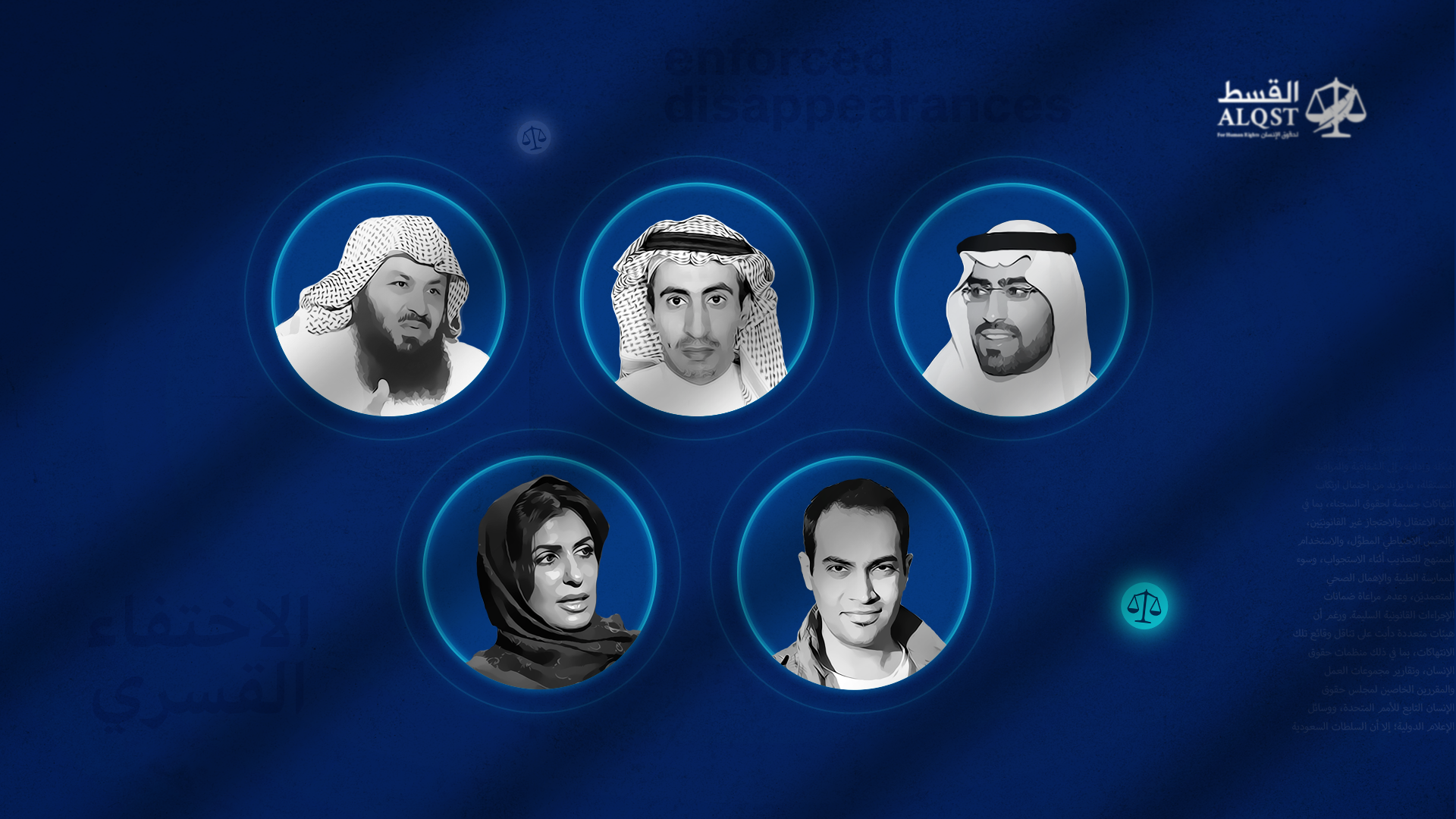 The Saudi authorities continue to routinely “disappear” activists and ordinary citizens, forcibly disappearing several more in recent months while others have remained missing for even longer.

In the past few months alone, several activists and bloggers have been arbitrarily arrested and disappeared after peacefully exercising their right to freedom of expression online, including physician Lina Alsharif and blogger Abdullah Gelan in May and activist Abdullah al-Mubaraki in July. Following their arrests, they were taken to unknown locations and denied contact with their families. ALQST has not yet been able to find out anything more about their status or whereabouts, raising concerns that they remain forcibly disappeared.

The 1992 International Convention for the Protection of All Persons from Enforced Disappearance (ICPPED) defines “enforced disappearance” as “the arrest, detention, abduction or any other form of deprivation of liberty by agents of the State or by persons or groups of persons acting with the authorisation, support or acquiescence of the State, followed by a refusal to acknowledge the deprivation of liberty or by concealment of the fate or whereabouts of the disappeared person, which place such a person outside the protection of the law.”

Saudi Arabia has not ratified the Convention, and systematically practises enforced disappearance against people exercising their right to free speech. Examples include preacher Sulaiman al-Dowaish, arrested on 22 April 2016, the morning after posting on Twitter comments critical of King Salman and Mohammed bin Salman, then Deputy Crown Prince. He was taken to a royal palace in Riyadh, where he was questioned by a high-ranking official about his Twitter posts and severely beaten until he was drenched in blood and others had to intervene for fear he would be killed. He was tortured on several further occasions. The last reported sighting of al-Dowaish was in July 2018. Nothing has been heard of him, or his health or whereabouts, since then; he remains forcibly disappeared.

Members of the Saudi ruling family have also been forcibly disappeared. In January 2018, Salman Al Saud was arrested, taken to Al-Ha’ir Prison and held incommunicado for seven months, without any news of his fate. After being transferred in early 2019, with his father Abdulaziz Al Saud, to detention in a private villa belonging to the authorities, on 28 March 2020 Salman was taken by masked men from the detention villa and moved to an unknown location, to be forcibly disappeared for a further two months before being returned to his father at the end of May. Most recently, on 28 November 2020, Salman and his father were again moved to an unknown location; they remain missing.

Basma bint Saud Al Saud, a daughter of the former King Saud, was subjected to enforced disappearance for more than a month after being arrested in March 2019, and was unable to contact her family until April 2019. During this time she was denied the medical care she needed for a potentially life-threatening condition. Basma remains forcibly disappeared, along with her daughter Suhoud, and there are fears for her health deteriorating as a result of deliberate neglect by the authorities.

The Saudi authorities often conceal people’s whereabouts when they are arrested, especially for the first few days or weeks of their detention, before the victims eventually resurface to face trial. Sometimes disappearances last a very long time, raising concerns for the safety and even lives of the victims. And sometimes limited information is revealed even after long periods of disappearance, only for the victims to be denied any further contact with the outside world.

Journalist Turki al-Jasser was arrested on 15 March 2018 following a raid on his home, and completely disappeared. For nearly two years he was not allowed any visitors or phone calls, and the authorities refused to answer any inquiries about him. Finally, in February 2020, in response to a submission from the Special Procedures of the UN Human Rights Council, the Saudi authorities said he was being held in al-Ha’ir prison. He was then allowed for the first time to make a phone call to his family, in which he informed them of his location, but since then he has been denied any further contact.

Humanitarian worker Abdulrahman al-Sadhan was arrested by secret police in March 2018 from his workplace at the headquarters of the Saudi Red Crescent in Riyadh. Following 23 months of enforced disappearance with no news about his fate, on 12 February 2020 he was allowed for the first time to make a phone call to his family, in which he said he was being held in al-Ha’ir Prison. He was denied any further contact with his family until 22 February 2021, and then, despite being informed that there were no charges against him and he would soon be released, on 3 March 2021 he was brought to trial before the Specialised Criminal Court (SCC), and on 5 April he was sentenced to 20 years in prison for his peaceful activism. Al-Sadhan continues to be denied contact with his family.