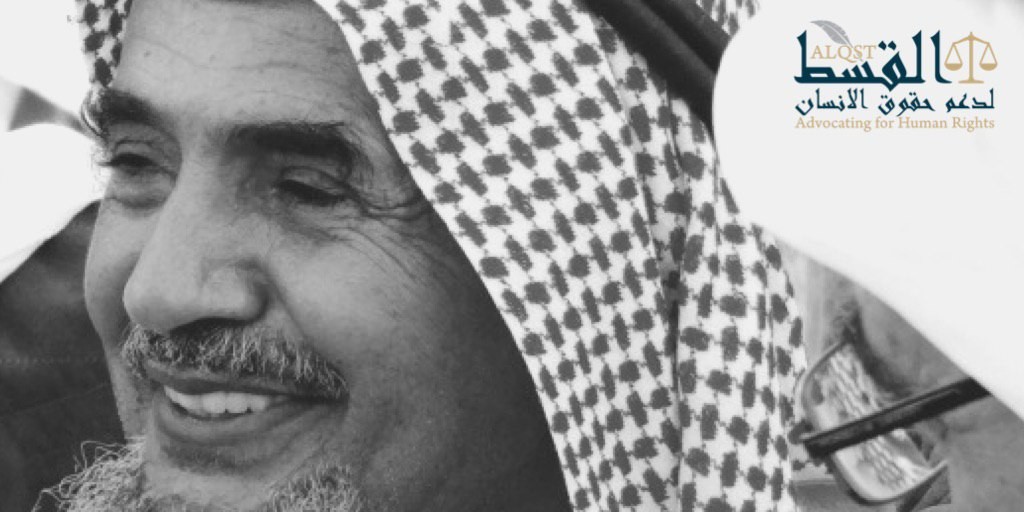 Visionary human rights defender Dr Abdullah al-Hamid, 69, died on 23 April 2020 at the King Saud Medical City Hospital after suffering a cerebral stroke on 9 April 2020. He had been in a critical state of health in prison for many months, suffering from a cardiovascular disease for which doctors told him at the start of the year he needed surgery. The authorities ignored this medical opinion and told him he would have the operation during Ramadan.

Despite his deteriorating health, advanced age and the rapid spread of COVID-19, the Saudi authorities refused to release Dr al-Hamid. Indeed, in recent months he had been denied phone calls and visits on a number of occasions, and was pressured not to inform his family or anyone else in the outside world about his state of health. On 9 April 2020 he lost consciousness and was transferred to King Saud Medical City Hospital, where he was diagnosed with a severe cerebral stroke that had left him in a coma. He was kept in the hospital’s intensive care unit and died there in the evening of 23 April 2020.

Abdullah al-Hamid was an academic and writer. He authored several books on the question of reform in Saudi Arabia, merging Islamic tradition with modern concepts. He believed that democratic and human rights values were central to Islamic culture and institutions, and he advocated for a constitutional monarchy, promoting civil society as a space to defend citizens against the excesses of power and authoritarian rule. Later, Abdullah al-Hamid was awarded the 2018 Right Livelihood Award for his “visionary and courageous efforts, guided by universal human rights principles, to reform the totalitarian political system in Saudi Arabia”.

ALQST Director Yahya Assiri commented: “Abdullah al-Hamid was a largely unsung reformer. The authorities constantly sought to suppress and silence him. He was a pioneer of the movement for constitutional reform and human rights, for the separation of powers and the rejection of tyranny and corruption. His passing in this way, for which the authorities cannot shirk responsibility, will not silence his voice nor put an end to his ambitions. His name will go down in history along with his struggles for human rights, and the world will come to know how hard our people are struggling for their freedom. The world will come to recognise this thanks to the heroic efforts of Abdullah al-Hamid, who dedicated his whole life to pursuing his project for reform.”

Al-Hamid’s activism stretched back over more than 20 years. In 1993 he co-founded the Committee for the Defence of Legitimate Rights, a political advocacy group whose stated objectives included the release of political detainees and accountability for abuses by members of the ruling family. In October 2009 al-Hamid and a group of other prominent Saudi human rights defenders, including his brothers Issa and Abdulrahman, established the Saudi Association for Civil and Political Rights (ACPRA), which worked to denounce rights violations within the kingdom and helped victims to file legal claims against the officials responsible. ACPRA also advocated for a constitutional monarchy, an independent judiciary, broader freedoms, and the respect of fair trial guarantees. In 2013 the association was banned and all of its members prosecuted for their activism. Most of them are still in prison serving long sentences.

Dr al-Hamid himself was imprisoned five times between 1993 and 2008, and was last arrested in March 2013. He was sentenced by the Specialised Criminal Court in Riyadh to 11 years in prison to be followed by a five-year travel ban. The charges against him included “promoting peaceful protests”, “incitement against the ruler, the king and senior scholars”; “causing public disorder and unrest”; “giving false testimonies to foreign organisations”; and “establishing an unlicensed civil society organisation”.

Abdullah al-Hamid and his ACPRA colleagues contributed greatly to a domestic grassroots approach to human rights that offers a local solution to the realisation of universal human rights in Saudi Arabia. Their personal sacrifice and years of dedication have been a source of inspiration and hope that genuine change will eventually come about in Saudi Arabia. Their cases have drawn international attention to the cruel tactics used by the Saudi regime to suppress peaceful human rights activism.

Since 2012, Dr al-Hamid had been the subject of several urgent appeals by UN Special Procedures. The UN Working Group on Arbitrary Detention issued a legal Opinion on his case in 2015 and called for his immediate release. The group of experts declared his detention to be arbitrary as he was subjected to an unfair trial and deprived of his liberty merely for exercising his fundamental right to freedom of expression.

ALQST holds the Saudi authorities directly responsible for Dr Abdullah al-Hamid’s death, and condemns their reckless behaviour with regard to his health, safety and life, including deliberately denying him the urgent medical treatment he needed, and repeatedly subjecting him to torture and ill-treatment in prison. Furthermore, ALQST calls once again on the Saudi authorities to release, immediately and unconditionally, all prisoners of conscience.

Al-Hamid is survived by his wife and eight children. His brothers Issa and Abdulrahman al-Hamid currently remain imprisoned for their activism.