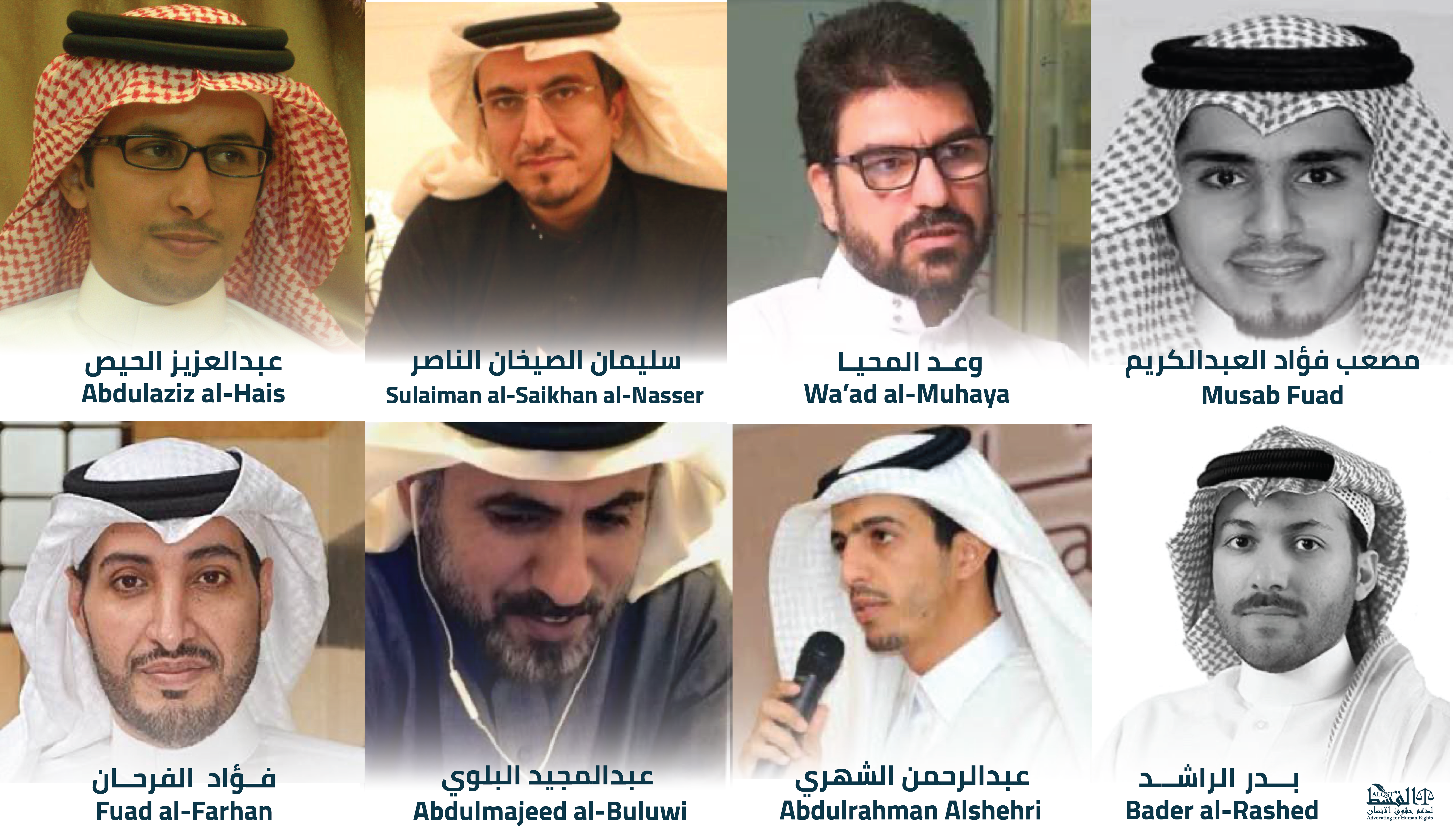 ALQST has learned that the Saudi authorities have carried out a new wave of arrests of journalists and activists, women and men, over the past few days, in a continuation of their previous crackdowns on civil society. At the same time, the authorities have stepped up their harassment of existing prisoners of conscience by means of continued torture, sexual harassment and other kinds of abuse.

At 4pm local time on Saturday, 16 November 2019, the Saudi authorities raided the homes of a number of writers in Riyadh: Bader al-Rashed, Sulaiman al-Saikhan al-Nasser, Wa’ad al-Muhaya and Musab Fuad; they then arrested them and seized their laptops and phones. Meanwhile, in Medina the authorities raided the home of writer Abdulmajeed al-Buluwi, arrested him and seized his mobile devices.

This latest wave of arrests represents another round in the continuing and far-reaching crackdown on activists, writers and advocates of reform that has been going on ever since Mohammed bin Salman became Crown Prince. The last one before this was in April this year, when a number of writers were arrested and subjected to torture; they have still not yet been brought to trial.

ALQST has also learned that the authorities are continuing to torture several activists, both men and women, in Saudi jails, either in customised torture chambers in houses away from the official prisons or within the prisons themselves. They continue to detain a number of less well-known men and women active on Twitter who are still being held in the torture chambers where a number of leading women human rights defenders were tortured earlier. Several previously detained activists are still being subjected to severe harassment inside prisons, either by means of prolonged periods of solitary confinement – as in the case of women activists Naseema al-Sadah and Loujain al-Hathloul – or by being constantly moved around from place to place and held incommunicado for periods, receiving repeated punishments inside places of detention, and having books and medication withheld – as has been the experience of activists Abdullah al-Hamid, Mohammed Fahad al-Qahtani, Fawzan al-Harbi, Abdulaziz al-Shubaily, Essa al-Nukhaifi and Waleed Abu al-Khair, among others.  Some have been transferred to a so-called “high security building”, and some have been subjected to beatings by so-called “order maintenance forces".

ALQST will be publishing a separate report later with more information on this building and these forces. Although the authorities pledged some time ago to investigate the brutal torture and sexual harassment undergone by several prisoners of conscience, such as Eman al-Nafjan, Abeer Namankani, Aziza al-Yousef, Loujain al-Hathloul, Samar Badawi, Nouf Abdulaziz al-Jeraiwy, Mayaa al-Zahrani, Shadan al-Onezi, Hatoon al-Fassi, Maisa al-Manea, Ali Hamza al-Umri, Mohammed al-Bajadi, Yasser al-Ayyaf and Aida al-Ghamdi, they have not conducted any genuine investigations, and neither have they stopped the torture.

Loujain al-Hathloul and Naseema al-Sadah are still in solitary confinement, and Nouf Abdulaziz al-Jeraiwy, Mayaa al-Zahrani and Samar Badawi are also still in prison. The whole case against them remains open, while even those who have been temporarily released pending trial are being prevented from continuing their work and studies.The authorities have not kept their promises made on many occasions to release them, close the case and compensate the women for damages; in fact they are continuing to violate their rights.

ALQST believes that the Saudi authorities are continuing to commit these violations, which affect everyone at all times, because of the silence of both the local and the global community, and because of the money the authorities are spending on PR, publicity and promoting the kingdom’s leadership. They are trying to cover up their abuses by holding high-profile sporting events and spectacles supported by businesspeople, politicians and sporting figures around the world, who are not taking account of the deteriorating state of human rights in Saudi Arabia and the grave dangers to society of this heavy repression.

ALQST would remind the Saudi authorities of their obligation to respect freedom of speech, their duty to desist from torture and arbitrary arrests, and their duty to release immediately and unconditionally all prisoners of conscience. At the same time, however, it maintains that everyone should step up to their responsibilities and refrain from playing any part in covering up these violations through politics, the media or sport. They should be prepared to uncover such abuses and boycott Saudi events, in order to create real pressure on the authorities to respect human rights and improve their human rights record.

NGOs ask Dakar Rally participants to #StandWithSaudiHeroes
The Dakar Rally, the world's most famous off-road endurance race, is due to take place in Saudi Arabia for its second edition from 3 to 15 of January 2021.