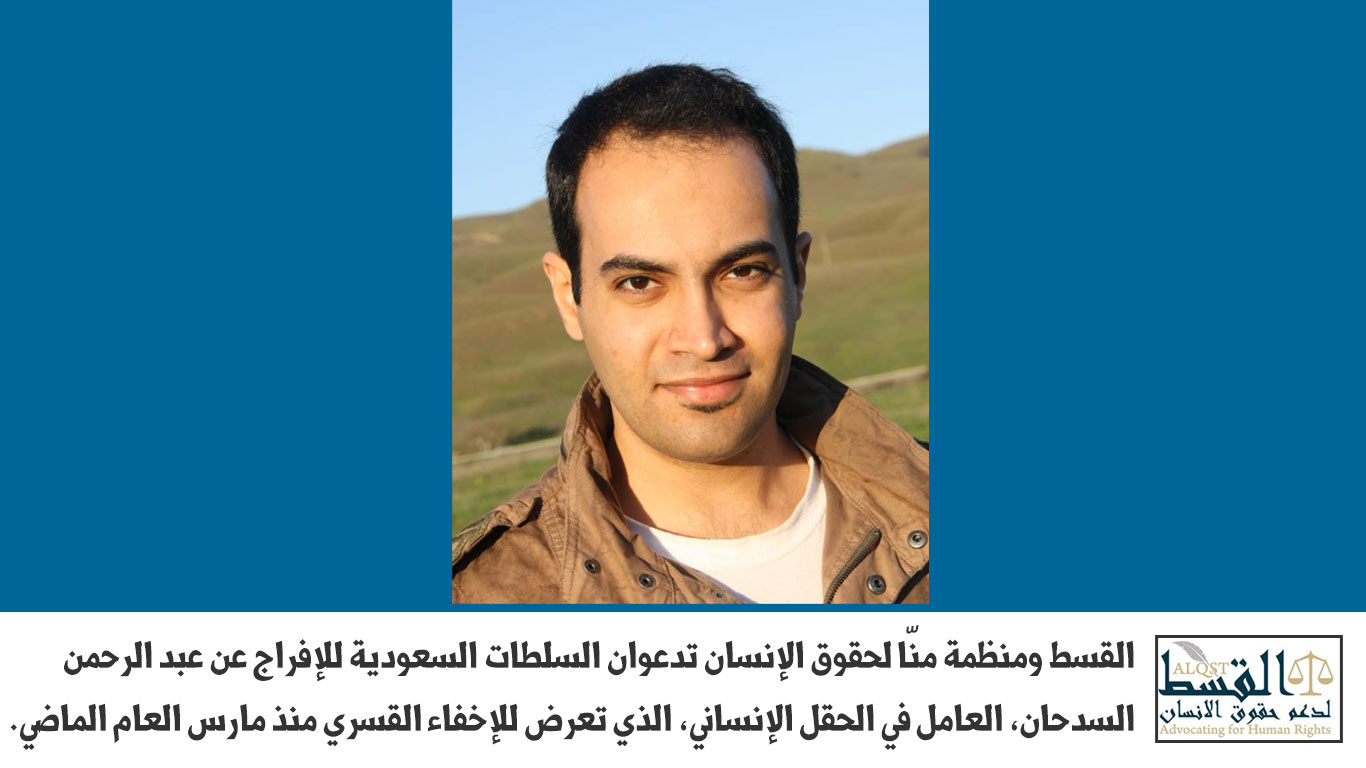 ALQST and MENA Rights Group call on the authorities in Saudi Arabia to immediately release humanitarian worker Abdulrahman AlSadhan, who has been subjected to enforced disappearance since March

Officials believed to be from Saudi Arabia’s Mabahith secret police arbitrarily arrested  humanitarian worker Abdulrahman AlSadhan, 35, in March 2018 and subsequently refused to provide any information despite repeated requests. Mr AlSadhan was last seen on 28 October 2018 by a detainee at Dhahban Prison in Jeddah, where he had been subjected to torture.

ALQST and MENA Rights Group call on the government of Saudi Arabia to immediately release AlSadhan, or at the very least grant him access to legal counsel and family visits and uphold his fair trial rights and due process guarantees.

On 12 March 2018, officials dressed in civilian clothes and believed to be from Saudi Arabia’s Mabahith secret police arrested AlSadhan from his work place at the headquarters of the Saudi Arabian Red Crescent Society in Riyadh. They confiscated his telephone before forcibly removing him and taking him to an unknown location. They did not show an arrest warrant or give any reason for the arrest.

The next day, a group of men dressed in police uniform entered his place of residence by force. Sources reported that they saw men removing a laptop, a smartphone and other personal belongings as they walked in and out of the property. Officials also confiscated his car.

Following his arrest, in April and May 2018, the Ministry of Interior’s online prison database contained no evidence that he had been detained. In addition, the Ministry of Interior’s Department of Security’s complaints centre said they did not have any information on AlSadhan’s fate or whereabouts. Finally, a clerk confirmed that his name was listed in their records and that he had been arrested. The clerk gave no information as to the location at which he was detained.

The official also confirmed that AlSadhan was under investigation, but that no one was allowed to contact or visit him. The official said that AlSadhan’s family could request a telephone “visit”, but that an in-person visit would not be permitted, stating rather that it could be, after “years, not months”.

Three separate requests were made to “visit” AlSadhan, in April, August and October 2018, and on each occasion it was refused. The authorities said that they would not accept any future requests and rather they would notify his family when they can visit. Up until now, AlSadhan’s family have still not been allowed any contact with him, on the phone or in-person.

On 14 November 2018, ALQST and MENA Rights Group submitted the case of AlSadhan to the United Nations Working Group on Enforced or Involuntary Disappearances.

In June 2016, the Committee against Torture, an independent United Nations treaty body comprised of experts who assess states’ compliance with international treaties, reviewed Saudi Arabia’s adherence to the Convention against Torture.

The Committee expressed concern “at reports that the majority of persons deprived of their liberty by Al-Mabahith are held in pretrial detention for prolonged periods of time and that their fundamental legal safeguards, including access to legal counsel of their choice and to habeas corpus, are frequently violated” and it called on the Mabahith to “[p]rovide detailed data on the number of persons detained […] their whereabouts and the amount of time elapsed before their presentation before a court”;  and to “[e]nsure that an independent entity is authorized to undertake monitoring visits to all Al-Mabahith detention facilities”. The Saudi Arabian authorities have not taken any steps to comply with these recommendations to date.