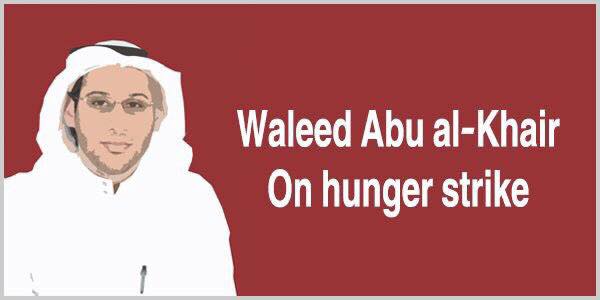 Update: On June 12, imprisoned human rights lawyer and activist Waleed Abu al-Khair ended his hunger strike after winning concessions from the Jeddah Prison administration. He had been demanding restoration of his rights to reading materials, medical check-ups and a proper diet suited to his health needs. Waleed is serving a 15-year prison term, having been tried under Saudi Arabia’s 2014 anti-terrorism law for his peaceful and legitimate human rights activities.

Saudi human rights activist Waleed Sami Abu al-Khair has embarked on an open-ended hunger strike, which he will maintain until the management at Jeddah Prison stops abusing him.

Waleed, who is observing the Muslim fasting month of Ramadan, has decided he will break his daily fast only by drinking water and will continue to abstain from food, in protest against harassment by the management at Jeddah Prison.

Waleed has asked for medical checks to be carried out because of concerns over infectious skin diseases that are widespread in the jail, but the prison is refusing to meet its obligation to maintain the health of prison inmates, including Waleed Abu al-Khair.  It is also refusing to allow in special foods appropriate to his state of health.

Conditions in Saudi prisons are bad enough at the best of times, but in the case of activists like Waleed there is also discrimination, and additional pressures are put on them in prison.

Waleed will continue his hunger strike until he is treated better.  We will update you on any changes in his condition.

ALQST maintains that Waleed Abu al-Khair’s detention and trial were both invalid and unlawful; insists that the activities for which he was put on trial were wholly legitimate; and calls for his immediate and unconditional release.

ALQST calls on everyone to press the Saudi authorities to release Waleed Abu al-Khair and to desist from putting his health and safety in jeopardy.