Saudi authorities round up Arab expats, visitors and pilgrims, and their Saudi employers and sponsors

ALQST has information that the Saudi authorities have been arresting large numbers of foreign residents of various Arab nationalities, as well as Saudi nationals who employ or sponsor them under the kafala system. These arbitrary arrests are politically motivated and unlawful. The security services have also, mostly on political grounds, arrested pilgrims and other visitors to Saudi Arabia, some of whom have subsequently been released.

ALQST also received a press release this week (see below) from the Palestinian group Hamas, with news that the Saudi authorities had on 4 April this year arrested 81-year-old Hamas official Muhammed Saleh al-Khudari, a resident of Jeddah in Saudi Arabia for nearly 30 years, and for two decades the man who managed Hamas’s relations with the kingdom. They also arrested his son, Hani al-Khudari. After five months of fruitless diplomatic efforts to secure the two men’s release quietly, Hamas decided to go public.

ALQST has also learned that some Saudi nationals have been arrested for connections to the Arab detainees through sponsorship, employment or family ties. The arrests are still going on, interspersed with releases of detainees without any charges being brought. This shows that they are being targeted for political reasons, not for anything they might have done.

ALQST maintains that the Saudi authorities are repeatedly violating human rights by arbitrarily arresting innocent people without any justification, and that they are hoping to get away with this by everyone remaining silent. They threaten victims and their relatives if they speak out, and punish anyone expressing sympathy with them.

ALQST calls on those states, organisations and families who have citizens or members being held in Saudi jails to stand up and speak out against the violation of their rights, tell the world what has happened to them, and pressure the authorities to release them. If people remain silent the problem will get worse, and violations will continue.

ALQST also calls on human rights bodies, NGOs and the media to press the Saudi authorities to put a stop to this unlawful and politically motivated campaign of arrests, and immediately release all those who have been arrested arbitrarily. 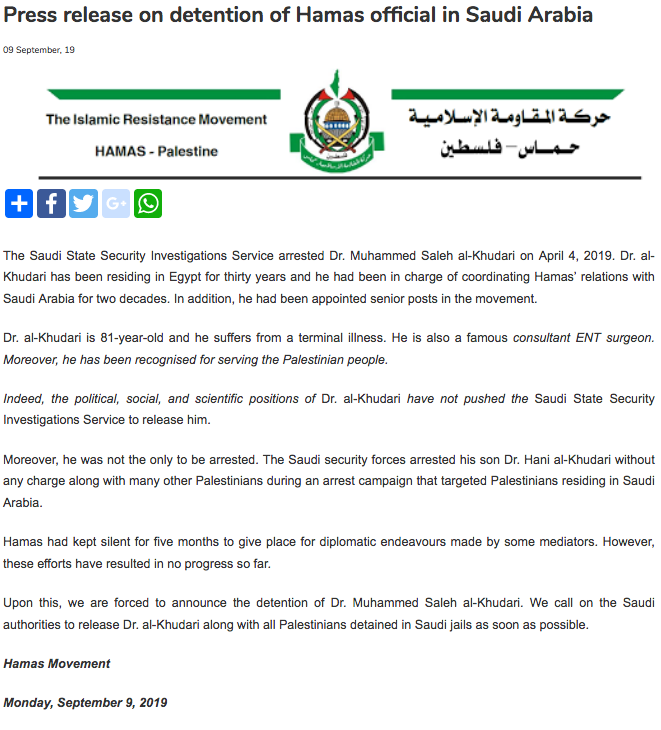 Torture continues in Saudi Arabia, despite official promises
Despite publicly undertaking to end torture in Saudi Arabia, the authorities continue to practise torture systematically in prisons and interrogation rooms.

In lead-up to G20 summit in Riyadh, ALQST campaigns for human rights to take centre stage
ALQST is launching a campaign to mobilise people around the world to urge G20 participants and governments to place human rights at the centre of all G20 discussions.