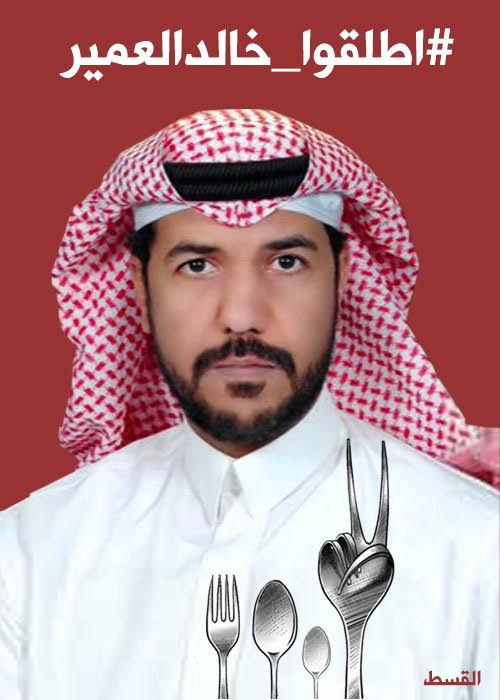 Update 3 November 2016: Khaled Al-Omair ends his 29-day hunger strike after being transferred to the Counselling Centre in preparation for release from jail. Keep demanding his immediate release, 29 days after the expiry of his unjust 8-year sentence for taking part in a peaceful demonstration.

Khaled bin Suleiman al-Omair has gone on hunger strike in protest against his continuing detention after the expiry of his eight-year prison term. He was sentenced for taking part in a demonstration, in a hearing that fell short of the standards for a fair trial and infringed his legitimate rights.

In the month of December 2008, during Israel’s “Operation Cast Lead” against Gaza, a number of activists asked the Saudi authorities for permission to hold a rally in Riyadh in solidarity with the victims in Gaza, as in many capital cities around the world.  However the Council of Senior Ulema in Saudi Arabia issued a fatwa declaring demonstrations unlawful because they constituted disobedience to the Saudi authorities, which had banned them.  On December 31, 2008, the day before the date set for the rally in Riyadh, Khaled al-Omair met the Interior Minister, now also Crown Prince, Mohamed bin Nayef, who refused to grant permission for the demonstration.  The following day, Thursday, January 1, 2009, Khaled al-Omair was arrested on al-Nahda Street in Riyadh by the interior ministry’s secret police and thrown in jail.

Al-Omair was subsequently put on trial in a secret court that failed to meet the standards for a fair trial.  He faced sweeping and illegal charges that infringed his legitimate rights, and was sentenced to eight years in prison for rebellion against the ruler and taking part in a demonstration.

Wednesday, October 5, 2016 was the date on which Khaled al-Omair was due to be released after serving his eight-year sentence, including a period in solitary detention.  While in prison he suffered harsh conditions of detention and health difficulties related to his diabetes and cardiac and renal pain.

Al-Omair was not released at the end of his unjust sentence, and so decided he would go on strike.  He will not be accepting food, visits or communications until he is let out.

ALQST maintains that al-Omair was arbitrarily detained and handed an unlawful sentence in a trial that fell short of the standards for a fair trial.  The charges against him infringed his basic rights.  Since the Saudi authorities have ratified several treaties that guarantee the right to demonstrate, punishing al-Omair for seeking or intending to demonstrate constitutes a violation of those treaties, which the Saudi authorities have undertaken to respect.  The handing down of a harsh sentence in a secret court and his treatment in prison constitute further violations of his rights.

ALQST urges everyone to act to save the life of Khaled al-Omair, by contacting the authorities and pressing them to: