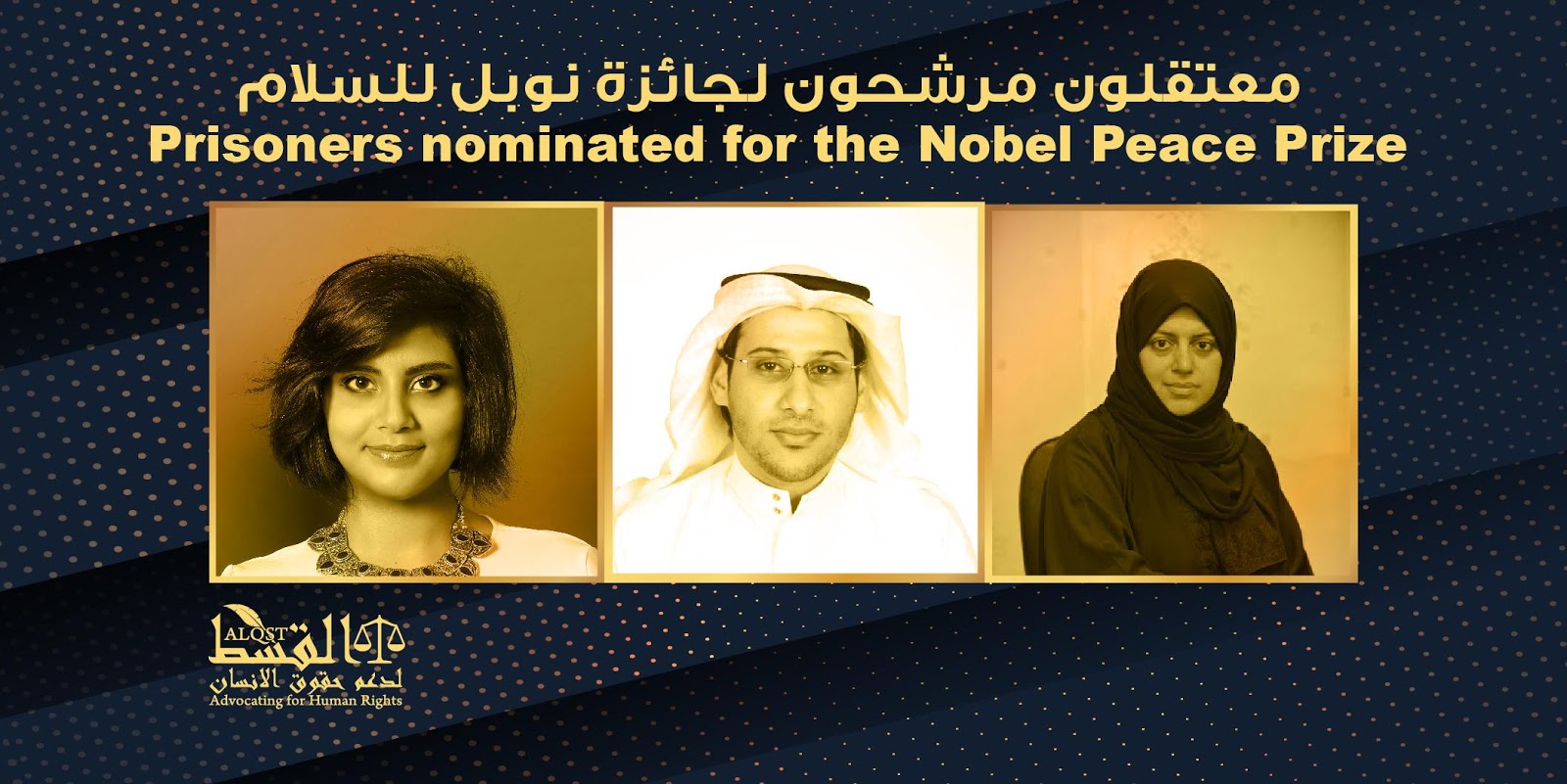 Imprisoned Saudi human rights defenders Loujain al-Hathloul, Waleed Abu al-Khair and Naseema al-Sadah have been nominated for the 2020 Nobel Peace Prize. This is not the first time that Saudi activists have been nominated for this award, and comes in light of a number of initiatives nominating imprisoned Saudi activists for international awards, including in recent days.

ALQST has long been campaigning for the champions of human rights in Saudi Arabia to be honoured with international awards and prizes as a way of drawing attention to their vital work, sending a clear message that their names have not been forgotten, and increasing the pressure on the Saudi authorities for their immediate release and to undertake reform to guarantee basic human rights.

Saudi activists pay a high price for defending human rights, with the Saudi authorities arresting anyone calling for reform. At the same time, the authorities aim to present an image of the country as striving for reform, including rolling out a large-scale PR offensive, and as a result the brave efforts of Saudi activists are not always widely known around the world. This is why such award nominations are so important.

A number of groups have nominated Saudi activists for the Nobel Peace Prize this year, including Norwegian Member of Parliament Karin Andersen, who led an initiative asking the Nobel Committee to award the prize to Saudi Arabian human rights defenders Loujain al-Hathloul, Waleed Abu al-Khair and Naseema al-Sadah for their years-long struggle for fundamental human rights in Saudi Arabia.

A prerequisite for peace in the Middle East is an open exchange of views, regardless of gender, religious beliefs and ethnicity. The three nominees have all taken brave initiatives to create such a space for debate. For their dedicated efforts, they have all paid a high price, their freedom.”

ALQST Director Yahya Assiri commented: “we welcome and thank Ms Andersen for this nomination recognising the selfless devotion to human rights of these three individuals Loujain, Waleed and Naseema, as well as Members of Congress and everyone who has nominated Saudi activists. Loujain, Waleed and Naseema are real heroes, who have given so much, at a considerably high personal cost, and of immense value to countless people.

When the Saudi authorities suppress these heroes, there are those around the world who take the side of the authorities, serving to enable their repression and contribute to the propaganda. But as such nominations show, there are also those who stand on the side of human rights, for which we are thankful.”

Loujain al-Hathloul is a central figure in Saudi Arabia’s women’s rights movement, including advocating for the lifting of the female driving ban and for the dismantlement of the male guardianship system. Her campaigning has seen her arrested numerous times: in 2014 when she drove into Saudi Arabia from the UAE; in March 2018 after attending a session in Geneva of the UN Committee on the Elimination of Discrimination Against Women (CEDAW); and most recently in May 2018, during a wave of arrests targeting women’s rights activists. She has since spent almost two years in detention, where she has faced brutal torture and sexual harassment, including being subjected to electric shocks, beating and threats of rape. She was offered a prison release on the condition of denying that she was tortured, an offer that she rejected. Loujain is currently facing trial on charges relating to her activism, in a trial marred by flawed proceedings. She has won several international awards, including the PEN/Barbey Freedom to Write Award and RSF Press Freedom Prize in 2019, in recognition of her peaceful struggle for women’s rights.

Waleed Abu al-Khair is one of Saudi Arabia's most prominent human rights defenders. He was the first to represent victims in Saudi Arabia’s Specialised Criminal Court (SCC), including blogger Raif Badawi and members of the now banned Saudi Association for Civil and Political Rights (ACPRA). He also founded a human rights organisation, the Monitor of Human Rights in Saudi Arabia, which the authorities refused to register. As a result of his advocacy, Waleed faced judicial harassment for years, and was arrested in 2014, and tried before the SCC. He was sentenced to a 15-year prison term and 15-year travel ban, with the charges against him relating solely to his human rights work, including “setting up and supervising an unlicensed association”. In prison, Waleed has been subjected to repeated ill-treatment, and he recently undertook a hunger strike for over a month in protest against his transfer to solitary confinement, and was hospitalised in January. Waleed has won several international awards for his work, including the Olof Palme Prize in 2012, the Ludovic Trarieux International Human Rights Prize in 2015, and the Right Livelihood Award in 2018, in recognition of his work to advance human rights.

Naseema al-Sadah is known for her persistent work defending human rights, including against gender-based and religous-based discrimination. In 2011 she was among the first to bring a lawsuit demanding that women be allowed to vote and stand as candidates in municipal elections taking place later that year. She is a co-founding member of human rights organisation Al-Adalah Center for Human Rights, which like the Monitor was denied a permit to work. She was also involved in campaigns to end the ban on women driving, attended court sessions on behalf of countless victims, and has provided legal training in various aspects of human rights, including on the rights of the Shi’a population. She was repeatedly targeted for her activism, and was arrested in July 2018 during the wave of arrests targeting prominent women’s rights activists, held for months in solitary confinement. Naseema remains in detention and currently facing trial for her activism.